Nasal irrigation consists of washing the nasal passages (including nasal sinuses) with a saline solution of various formulations.

The anatomy of the nasal cavities allows a fluid that enters through one nostril, to circulate through the inside of the nose and nasal sinuses and to exit out through the other nostril. 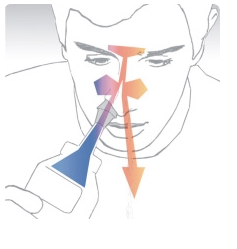 This practice originated in India, where they have been practicing it for centuries as part of their purification rituals (Jala Neti) utilizing a pot similar to a teapot called Neti pot. In the West, nasal irrigation with a syringe or bulb is a traditional home-based remedy against excessive nasal congestion.

Different studies in the past few years have demonstrated that irrigation of the nose once or twice a day with a saline solution diminishes nasal obstruction and is particularly efficient for rhinitis or sinusitis patients.

The irrigation liquid cleans the nasal channels due to its drag effect, removing accumulated secretions, pus, allergens and other contaminants deposited in the nasal mucosa during breathing. This cleansing considerably reduces nasal congestion and has an anti-inflammatory effect on the mucosa.